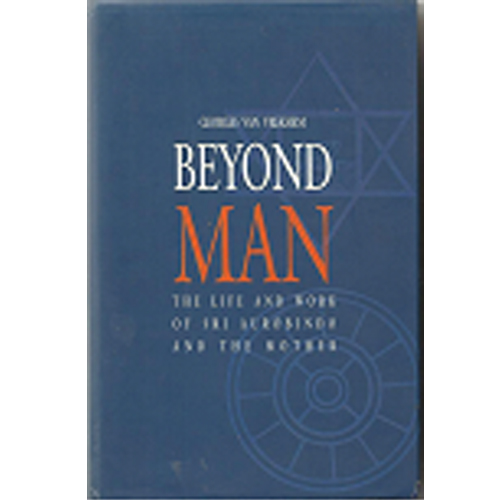 Consumenten prijs € 37,- / Blz.544 / ISBN 81-7223-278-0 / Hard cover
If any persons from India's political history, philosophical thought and spiritual greatness can be labeled as The Great Unknown, they are Sri Aurobindo and The Mother.

Few indeed know about Sri Aurobindo's role as one of the leaders of India's early independence movement; or of his theory of evolution beyond mankind; or of his and The Mother's occult action on world events.

Even less is their true mission known: to bring down on earth a higher level of consciousness, called by Sri Aurobindo "the Supermind", in order to make a divine life on earth possible.  For, says Sri Aurobindo, "Evolution is not finished; reason is not the last word nor the reasoning animal the supreme figure of Nature.  As man emerged out of the animal, so out of man the superman emerges."

Beyond Man, The Life and Work of Sri Aurobindo and The Mother contains extensive quotations from the works of Sri Aurobindo and The Mother as well as from the writings by those who have been near to them.  The result is a hefty volume of over 500 pages.  But its story is gripping and will introduce the reader to the heart of the matter. In fact, the book is so informative and thought -provoking that its length feels rather like a bonus than an ordeal. This book is a fitting ode to one of the greatest spiritual thinkers of our times.
Uitgegeven door Harper Collins, gesponsord door stichting Aurofonds. www.beyondman.org
Jaar van uitgave: 1997