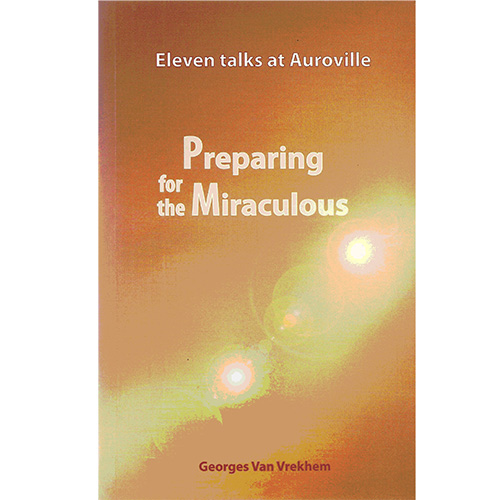 Consumenten prijs € 13,50 / Blz. 268 / ISBN 81-87582-09-X / Paperback
What is the meaning of our existence in the cosmic scheme? Is there a divine purpose in life or is it merely the mechanical playing-out of competing “greedy genes”?
Do we live in a blind universe aimlessly running its course from Big Bang to Big Crunch or is there a higher purpose in evolution? If there is a conscious guiding intent, why does it allow evil to exist?

How do we transcend the limits of a blind "scientism" locking itself out of a vaster understanding by refusing to admit the existence of any factors outside of its self-imposed limits of “scientific” verifiability? Can these questions be tackled without landing in the other extreme of religious dogma? Is our planet Earth special in the universe? Do we human beings have a special role in evolution?

Georges Van Vrekhem explores these and other timeless questions in the light of Sri Aurobindo's evolutionary concept and casts a refreshing new look on issues that have been the lasting preoccupation of seekers throughout the ages.
This book contains the edited versions of eleven talks that Georges Van Vrekhem gave in Auroville in 2010 and 2011:
* Adam Kadmon and the Evolution
* The Development of Sri Aurobindo's Thought
* Preparing for the Miraculous
* What Arjuna Saw: the Dark Side of the Force
* 2012 and 1956: Doomsday?
* Being Human and the Copernican Evolution
* Bridges across the Afterlife
* Sri Aurobindo's Descent into Death
* Sri Aurobindo and the Big Bang
* Theodicy: “Nature Makes no Mistakes”
* The Kalki Avatar.